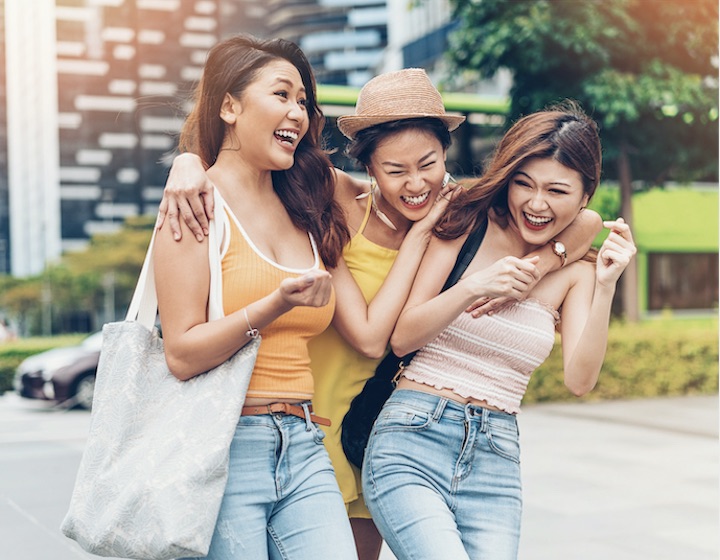 Psst! Do your teens sound like they’re speaking a foreign language? We spill the tea on all the new Gen Z urban slang terms that your teens and tweens are using today (we hope these are still in).

If you ever wish to feel your age, speaking to a Gen Z teen is the way to go. Believe us mamas, nothing will make you feel more lost or irrelevant than listening to what the Gen Z kids are talking about (or texting about, or posting on Tik Tok, more likely). This list will probably already be outdated by the time we update it but we’re still going to try our best to spill all the tea for you before it becomes lukewarm.

Learning these Gen Z slang terms might help you better understand your teen (because honestly, the new Gen Z slang is a whole language of it’s own) but more importantly, using these terms in a conversation with your teens will have them running in the other direction real fast (and you’ll get to enjoy a couple hours of peace!) Read on for our guide to Gen Z urban slang terms, mamas!

‘no exaggeration’ or ‘for real’
How to use it: “That really happened, no cap.”

An acronym for “as f*ck”. This oldie but goodie is often used as an adjective to emphasise and exaggerate a statement. Mainly used in text messages, this term isn’t regularly used in a face-to-face conversation (trust us, we’ve tried it and it wasn’t pretty).
How to use it: “My daughter broke my favourite highlighter today. I’m mad AF.”

Have you ever done something so silly that it made you question all of your life decisions? The Gen Z kids would call that a big brain moment (though you might feel your own brain shrink as you regret all of your life decisions).
How to use it: “and then I used my fork to cut my steak instead of my knife”
Friend: “That’s a big brain moment right there.”

Used to describe your typical alpha male, for some (ahem, men) they may think that it is a compliment but for others, it is most definitely not.
How to use it: “Isn’t he such a gentleman?”
Friend: “Uh, no he’s a chad.”

To be completely and utterly destroyed.
How to use it: Person: *insults someone*
Friend: “Damn, you clapped him.”

People who are completely unintelligent. See also: clowning.
How to use it: Person: “Roses are blue!”
Friend: “Please stop, you are clowning right now.”

For once this actually does mean what the root word implies, but Gen Z kids these days use it to describe anything that’s embarrassing or try-hard. The Gen Z spelling has no time for that extra ‘e’ in cringey.
How to use it: “Did you see the Tik Tok he just made? It was so cringy.”

Another way to say ‘gonna’. A shortened version of the U.S. Southern phrase “I’m fixin’ to…” and also perhaps derived from the Jamaican word “fi” (“to do”).
How to use it: “Finna finish this pizza all by myself.”

Fear Of Missing Out.
How to use it: “I can’t believe I missed the flea market! Now I have FOMO…“

For real. Stick to the text messages with this one too, fr.
How to use it: “I’m so tired man fr.”

Greatest Of All Time.
How to use it: “NGL [see below!] Taylor Swift is the GOAT fr.”

Ever been so speechless that you just can’t find the words? “I can’t even” is an expression commonly used when someone is feeling either so overjoyed or exasperated that they can’t even find the right words; depending on the context. May also be accompanied by collapsing in total exasperation.
How to use it: “Everything that could go wrong today actually went wrong today. I can’t even.”

‘In Real Life’.
How to use it: “After following her on IG for so long I finally got to meet her IRL!”

Ever been to a restaurant and heard a lady yell at the waiter about how her ice water doesn’t have enough ice cubes? Then you’ve met a Karen. A stereotype for women who behave extremely unreasonably and childish – especially towards service staff or people of colour – and tend to invoke their racial privilege.
How to use it: Woman: *telling a story about a minor inconvenience she had in a store* “…And then I asked to speak to the manager.”
Gen Z friend: “Did you have to be such a Karen about it?”

‘Secretly’.
How to use it: “As much as I love how this new diet is making me feel, I low key can’t wait for cheat day.”

Don’t take offence if your Gen Z teen decides to call one of their idols ‘mom’ or ‘dad’. It just means to admire or look up to someone so much that you jokingly want to be adopted by them or have them as your second (third?) parent. Totally normal.
How to use it: “Omg MOM

Not Gonna Lie.
How to use it: ngl she low key gives pick me vibes

Pick me girls are the type of girls who claim that they are nothing like other girls, in order to get attention from guys (also see ‘simping’ below). It’s a derogatory term.
How to use it: “She’s behaving like such a pick me girl”

Short for ‘baby boomer’, referring to older folks born 1946 to 1964 – but mostly used to clap back at pretty much anyone who’s older and not so in-the-know.

Short for ‘suspicious’, used to describe anyone behaving in a sketching way.
How to use it: “Why is he being so sus?”

How to use it: Person: “Yup, my boyfriend does everything for me!”
Friend: “OMG, what a simp!”

To describe something that’s really good
How to use it: “Yo that song actually slaps.”

Doing something really well and is often used as an encouragement.
How to use it: Person: “Does my hair look good?”
Friend: “Yas [see below!], slay!”

“Sleeping on” was most recently introduced to the general public on television by American ice skater Adam Rippon. Here you can see the term in action as he passionately describes how he had not noticed before how cute Shawn Mendes actually was.
How to use it: “Stop sleeping on heartland malls. They seriously have some of the best playgrounds!”

Originating from Eminem’s iconic song of the same name, ‘stan’ is the term used for the obsessive fans of a popular celebrity. It can also be used as a verb.
How to use it: “I’m a Beyoncé stan.” OR “I will stan Beyoncé forever!”

Bitter or upset.
How to use it: Woman: “I can’t believe she ate my last donut”
Friend: “Do you have to be so salty about it?”

Surprised or shocked.
How to use it: “Omg, can’t believe I managed to cook tonight and be in bed before 9! I’m shook!”

‘Shake my head’. Another one for texting, smh usually signifies exasperation.
How to use it: “I thought I could get some sleep last night but my kid kept me up all night smh.”

TBH is short for “to be honest” and is usually used when making a comment or a joke (best to stick to texts with this one too).
How to use it: “Planning this birthday party is gonna drain me tbh.”

Meaning ‘gossip’, ‘scoop’ or ‘news’, ‘tea’ is not just your average afternoon beverage anymore.
How to use it: “So what happened last week? Spill the tea.”

An acronym for “the f*ck”. Sometimes used to abbreviate “wtf” (seriously, how lazy are we?!).
How to use it: *while texting* “Our daughter just broke my most expensive makeup item tf.”

If someone is thirsty, handing them a glass of water is not what they are looking for. Nowadays, thirsty stands for desperate, usually for attention. Related: Thirst trap: a social media post intended to, uh, entice viewers and get attention.
How to use it: “Jason Derulo is the undisputed king of IG thirst traps.”

Meaning ‘well-informed’ or used to describe someone who’s aware of the current social/political climate.
How to use it: “Did you see Dove Cameron’s new music video for her song breakfast? Woke af.”

A very enthusiastic and celebratory way of saying yes!

The Gen Z version of YOLO (you only live once). Usually exclaimed (pretty loudly) when doing something risky or throwing an item very hard (most of the time for absolutely no reason at all and with absolutely no aim).
How to use it: “No skill just YEET!”

Win/Lose, because Gen Z must condense even the shortest of words to be even shorter.
How to use it: Person: “This guy just cut me off in traffic and scratched up my car!”
Friend: “L”

Lead image via Getty Images. Sassy Mama constantly updates this article with help from the team member closest in age to the Gen Z gang. Written by Sonia, Aida, Syazana and Liyana.