Read more: Where to See Crocodiles, Dolphins, Otters and more in Singapore!

The newly opened Dinoland Singapore at SAFRA Yishun offers kids the largest display of life-sized animatronics dinosaurs in an indoor air-con forest trail. The 1.5 hour guided tour starts with getting dressed as a ranger, then get stuck into hands-on activities such as fossil digging and climbing through an underground cave. You’ll be able to get up close with these dinosaurs too. There are over 20 dinosaurs to learn about including the Tyrannosaurus Rex, Brontosaurus, Pterodactyl, Triceratops, and Velociraptor. Do note for little ones – the dinosaurs are super realistic and can be quite loud so warn them in advance!

Jurassic Nest is a new dinosaur-themed food hall in Gardens by the Bay. You’ll find 18 dinosaurs at Jurassic Nest at Supertree Grove including a T. rex and Brachiosaurus, the two fiercest and tallest dinosaurs which will come alive roaring to original soundtracks (for approximately three minutes each time). Catch the dinosaur ‘show’ with free admission every hour from 12pm to 8pm. This new dinosaur-themed food court is where you’ll also find Michelin-starred brands serving up a range of Asian cuisine from Hawker Chan’s Chicken Rice and Tsuta Ramen to Mama by Putien. 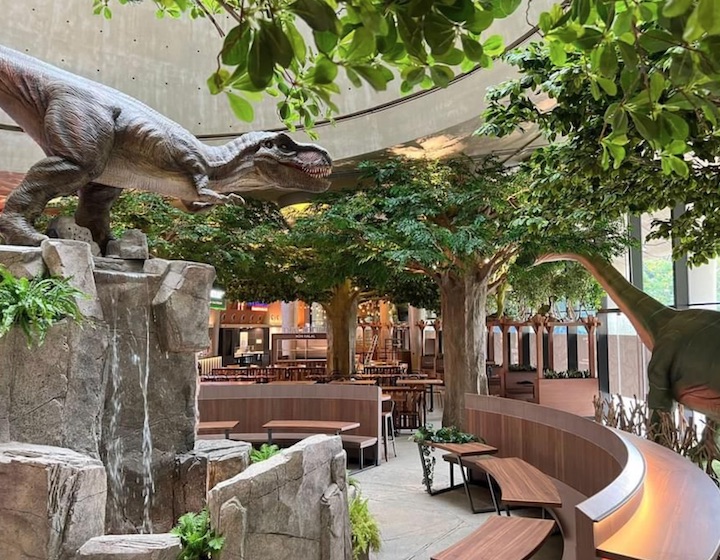 There’s also an outdoor alfresco area JN Café, where you can see an Oviraptor that comes alive nine times a day at hourly intervals from 11.30am to 7.30pm. In between, catch 15 other static dinosaurs from the Velociraptor and Dilong Paradoxus to the Corythosaurus and Parasaurolophus, scattered across the food hall while you dine on your favourite foods.
Pssst! Don’t miss the new educational trail that takes you around the gardens on a prehistoric adventure to learn more about the unique diets of herbivorous dinosaurs! Head over to the Mega Carnival at D’Marquee Downtown East where there will be over 20 games and rides, Virtual Reality stations, an old-school arcade with dance games and LED air hockey. Little kids will love the colourful inflatables of all sizes, while big kids will dig the thrilling gladiator attraction (don transparent inflatable bubbles to challenge each other in the ring!).

Ah, now we are getting to the real stuff! If your kids are on a quest for knowledge about dinosaurs, this is the place! The Lee Kong Chian Natural History Museum’s three diplodocid sauropod fossils were among the largest and heaviest animals to ever walk on land. They dwarf even the biggest theropods such as Tyrannosaurs. These fossils are estimated to be between 149 and 156 million years old and are more than 80% complete. Two of the dinosaur skeletons come with skulls which we are told is a rarity!

Price to see dinosaurs: $9/$16 for Singaporean/PR child/adult or $13/$21 child/adult
When: Ongoing
Where: National University of Singapore 2 Conservatory Drive, Singapore 117377

Head over to Changi Jurassic Mile for Singapore’s largest permanent outdoor display of 20 different life-sized dinosaurs. This one-kilometre dino-themed cycling and jogging track along the 3.5km Changi Airport Connector path links the Jewel Changi Airport to East Coast Park and the Park Connector Network (PCN). Look out for the Tyrannosaurus Rex, dinosaur eggs, the Brontosaurus and the bright blue Velociraptors. Handy information panels show facts about these dinosaurs along that path while outdoor speakers play safari-themed music for the complete Jurassic Park style experience. Full deets here.
If you are heading here with little kids, do be warned that it is a walk of 2 km from HUB & SPOKE car park to the start of Jurassic Mile (which is a one kilometre path)! So you may want to bring scooters or cycle instead. NEW! From now to 31 January 2023 (7pm – 10am), be mesmerised by Dino Glow: Changi’s longest-ever festive light-up along the Changi Airport Connector. Inspired by the bioluminescence of the world of Avatar, the new light-up has illuminated jellyfish which leads to glowing fungi, sparkling trees, and dazzling dinosaurs. Plus if you’re hungry head to Terminal 2 (opposite carpark 2A) where for the first time you’ll find food trucks at the start of the Park Connector. Food vendors include Old Chang Kee, The Halal Food Truck, The Goodburger, Crowne Plaza, The Coffee Bandits, Blueberry Bubble Tea, The Travelling C.O.W and more!

You’ll find dinosaurs in Singapore at this super old-school heartland playground! These guys are probably the oldest dinosaurs in Singapore – they were installed by sculpture specialists Hong Hai Environmental Arts in 2000. The gigantic, three-metre-tall tyrannosaurus rex is at the centre of the play area surrounded by white eggs, with a baby T-rex nearby. Kids can’t really interact with these prehistoric beasts but there’s some play equipment nearby with a small slide, activity panel and climbing handholds.

The Dino Pit at KidsSTOP (part of Science Centre Singapore) is a must-visit for budding paleontologists! Preschoolers and little ones love taking off their socks and getting stuck in the sand here while they dig out dinosaur fossils. Designed to provide kids with a memorable sensory experience, this Dino Pit activity will have your kids identifying the different parts of the fossil, as they role-play at being a paleontologist. There’s also an interactive board that booms out dinosaur facts to test your kids’ knowledge about these prehistoric creatures. The water playground at Causeway Point has reopened, and it’s dino-themed! There’s a 2.2m hollow dinosaur rib cage with water jets, a Toddler Dino Zone, Adventure Volcano and Crater Zone, two long slides (best for kids age 5 and up!), giant rocks and even a mist-spraying volcano that ‘erupts’! In the evening, it even lights up in cool neon colours. Watch the video here for a sneak peek before you go! Entry is free and no pre-booking is required!

There’s a carnival in town! Head on over to Punggol Container Park, for Uncle Ringo funfair rides, archery, restaurants and of course dinosaurs! The carnival consists of two carousel rides, a merry-go-round swing, balloon wheel ride, train ride, pirate ship and a ‘dinosaur and mythical creatures’ park. This is where you’ll find moving life-sized dinosaurs and mythical creatures such as dragons, plus speakers throughout the area playing Jurassic Park-like music. Kids will love the fact that the dinosaurs roar to make it feel super real!

Price to see dinosaurs: $5 per entry to dinosaur park, all rides priced individually.
When: until Dec 2022! Every Wednesday to Sunday, 5pm to 9pm (close on Mon and Tue)
Where: Uncle Ringo, Punggol Container Park, 50 Punggol East (behind Riveria LRT), end of Tebing Lane

If your kids want to get up close and personal with dinosaurs in Singapore, head over to the dinosaur slides and stone dinosaur sculptures at the free to enter playground Fu Shan Garden. Kids can clamber all over the dinosaurs here unlike at other dinosaur installations. Can you find the dimetrodon, sauropod, pteranodon, triceratops, and tyrannosaurus rex? There are tunnels to explore and some newer additions to this dinosaur playground include the colourful wooden stegosaurus and triceratops with hollowed-out tummies to hide in.

Looking for dinosaur-themed thrills? Take a step back in time into the world of dinosaurs in Singapore at Universal Studios Singapore. This is where you’ll find lots of adrenaline-fuelled fun for dinosaur lovers. Three rides are of note; the Canopy Flyer for a prehistoric bird’s eye view of Jurassic Park, Dino-Soarin’ where kids can ride on the back of flying Pteranodons, and the Jurassic Park Rapids Adventure for a thrilling river raft ride through dinosaur habitats – expect to get soaked! If your kids are super keen on dinosaurs you may want to plump for the Jurassic World Dominion Dining Adventure (see below).

If you have a dinosaur lover at home, take them to see the dinosaur-themed Omni Theatre show ‘Dinosaurs of Antarctica’ at Southeast Asia’s first 8K 3D digital dome theatre at the Science Centre Singapore! This amazing 40-minute show (best for 8yr olds+) takes you on a science expedition following modern-day Antarctic scientists on a quest to understand the ice continent’s profound transformation. You’ll also get a glimpse of life during the lost prehistoric world of Gondwana when bug-eyed dinosaurs and colossal amphibians roamed Antarctica – the special effects are great.

Dinosaur lovers will be excited to know that you can even see dinosaurs in Singapore at Jewel! This dinosaur-themed augmented reality experience takes you back 89 million years to the Cretaceous period. Kids aged 6 years old and above can look for augmented reality dinosaurs with a TimeLens. Hunt through Shiseido Forest Valley and Canopy Park and see if you can spot the dinosaurs. Complete the mission and participate in activities and games.

Every effort has been taken to ensure details are correct however as venues may close without warning- always best to check with each venue directly before heading down. What's On
Posted 4 days ago | By Beate