On the weekend, my two little bears and I found ourselves sitting in a dappled wood speckled with birdsong in The Little Company’s (a division of the Singapore Repertory Theatre) Chinese production of Goldilocks and the Three Bears《金发姑娘和三只熊》.

The space we sat in was not too large and not too small; it was just right and cosy for a trio of bears on their first family trip to the theatre. The romping and stomping on stage that we saw was not too long and not too short; it was just right for a 6-year-old laughing at shaggy bear antics. The little bears were lapping up their first play like it was a warm bowl of porridge and honey! 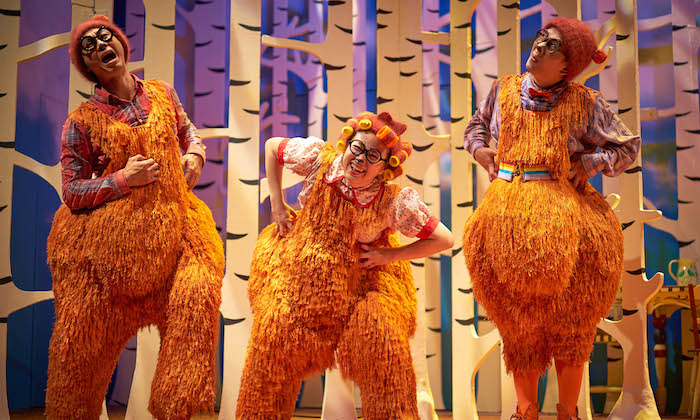 The Little Company clearly does a great introduction to theatre-going for the under-10 crowd. The stage set is simple and evocative: sunlight filtering on straight tall tree trunks, cosy beds that fold into the wall in the morning, a playhouse for bears everywhere. The three bears are sweet goofballs, lumbering about like mobile orange shag-carpets with hipster black-rim spectacles. They ham it up for the benefit of those in the booster seats in the audience – whether it’s making a real hash of porridge cooking or cheekily scratching their expansive butts.

In particular, the gleefully melodramatic scene where Goldilocks and the bears discover each other will very likely have your littles ROTFL. Songs are upbeat and great to bob to, and the interactive segments with the audience were very welcome. The production was top-notch in many ways, but elocution was a weaker point. This Mama Bear appreciates bell-clear enunciation in Chinese performances, and the actors of Goldilocks did not always deliver (except Edward Choy, as Mr Locks the tree cutter and father of Goldilocks). Perhaps it’s because the actors were mostly trained in English language theatre; perhaps the quick-tempo, lyric-heavy songs did not help, with the actors rapid-firing the lyrics rather than savouring each word. Translating a musical between two such different languages is also marvellously tricky business – how in the blazes can anyone nail the meaning AND the rhythm AND the rhyme? Danny Yeo and Zhang Lesheng have done an admirable job here but, still, you know, sometimes one can’t help but hear the English echoes of the Chinese lyrics (“牙和爪”? Tooth and claw?) and the original lyrics simply sit so much more comfortably with the tunes. In a way, this tastes like English porridge served in a Chinese soup bowl. If you are a non-Chinese speaking Mama Bear with little bears who understand Chinese, it is definitely still worth checking out Goldilocks. Little ones will understand some of the lyrics (especially the porridge-making scene), and mamas can rock out to the tunes. You can also acquaint the littles with the story the night before, so they know what to expect!

Let us not forget that this is a play for small wee bears, not for grumbly grizzled old bears going on about what kind of porridge to serve in which bowls and, for the wee bears on their first visit to the magic dappled woods, a bowl of plain oat porridge with honey will be just right, xiong mama, xiexie! 10 Fun Things to Do This Weekend (8-9 October) with Kids in Singapore: Weekend Planner Where to Hire Magicians in Singapore for Kids’ Birthday Parties