Amazon.com launched with much fanfare last week, but there were some definite hiccups. Here’s what we liked, what we didn’t like, and improvements we hope to see soon!

As we shared with much excitement on our Facebook page last week, Amazon.com has finally, properly launched in Singapore! Sort of. Let’s start with the bad news first: this isn’t the same Amazon we all know and love from the U.S. or the UK. There are no books, or clothes, or an endless array of beauty and baby products at amazing prices. Not YET, anyway.

What we have at the moment is Amazon Prime Now, which is basically an online grocery delivery service (with the perk that they carry a lot more stuff than just groceries – everything from toys, to camping gear, to electronics). On the bright side, this is backed by Amazon’s legendary logistics, and once things are running at full speed, promises two-hour delivery after you place your orders, which is pretty awesome. (They don’t seem to quite be there yet – more on this below). On the mildly annoying front, goods can ONLY be ordered via app (available for both iOS and for Android), on your phone. So get ready for lots of scrolling, mamas. Like, I think it’s really cool that they’re selling B.O.B. Jogging Strollers (are these even available anywhere else in Singapore?), Micro Scooters and Chicco Car Seats, but is that something you’re really going to order on a whim while scrolling?

Another cool thing: I was able to log in with my American Amazon account details, and both my home address and payment details were already in the system, making ordering a total snap.

How does it compare to local grocery stores? I found the prices to be a bit cheaper than Cold Storage, and about the same as FairPrice or RedMart.

HOWEVER, the current selection has none of the stuff that I would seek out at Cold Storage; I would have loved to see an organic section — at the very least staples like Bob’s Red Mill, Chobani Yogurt or Annie’s Mac & Cheese, or Seventh Generation Baby Wipes or California Baby skincare products. At the risk of sounding douchey, there’s barely even any quinoa. I feel like this is an area where Amazon could really set itself apart from the local players, as clearly their global distribution links are much stronger.

Along the same lines, I was disappointed to see that the electronics section doesn’t have Kindles or the awesome Amazon Echo – two products that have been a huge hit in the U.S. Again, I’m hopeful that these will perhaps arrive in time, once it’s more established and able to grow operations.

And clearly there are still some kinks to be worked out… So obviously the big pitch is that anyone can get free 2-hour delivery with a minimum spend of $40 (for $9.99, one-hour delivery is even an option). But when I ordered at 1:30pm on Thursday (the day of launch), already the next available delivery window was 24 hours later on Friday afternoon.

By 4pm on Thursday, one of my colleagues who tried to order got an error message that NO delivery was available in her area. Apparently this is because the brand new warehouse is staffed by humans fulfilling orders by hand (not robots like in other places), and they were simply overwhelmed.

I’ve heard orders are still not quite on track, but I have confidence that they will quickly get these kinks worked out.

Furthermore, when my order WAS delivered, I was pleased to receive a text message update that it would be arriving shortly, along with a tracking link so I could see where the driver was. When I saw that he had gone to the wrong place (there’s a glitch in Waze that frequently sends drivers to the wrong street), I was able to call him immediately to get everything straightened out.

Additionally, I liked that our goods arrived in paper, rather than plastic, bags. 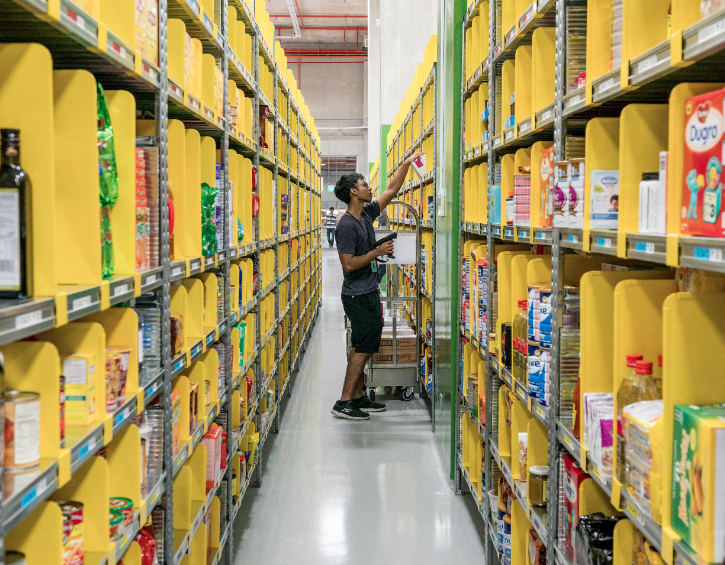 I really like the “Amazon Basics” category, which includes well-priced items like batteries, hangers, towels, and sheets (even California King, which can be tough to find in Singapore!).

While the Baby and Kids sections are kind of massive, unwieldy, and hard to sort, there IS a great selection from nice brands like Melissa and Doug and Skip Hop.

On the other hand, I noticed a “For Boys” category that appeared to simply be sponsored by Transformers. Remind me to never, ever let my daughter play with Transformers (even though I played with them as a kid); I’m disappointed that Amazon would be ok with that kind of gender bias when most progressive companies (such as Target) are going in the opposite direction. Interestingly, that category has now disappeared from the front page.

While the Amazon Basics section has some handy pet stuff (like poop bags – which are insanely expensive here for some reason – and water bowls), the actual Pets section is incredibly weak with maybe two brands of pet food. I’d LOVE if Amazon could actually save me a trip to Pet Lovers Centre, but as of right now that doesn’t look to be the case.

Will I use Amazon Prime Now again? Absolutely. I have too much faith in Amazon not to believe it will quickly learn from its mistakes and improve upon them.

First and foremost, I REALLY hope they will be able to expand their selection quickly to differentiate from other grocery delivery companies in Singapore. And I know we’re all holding our breaths for the day books can easily be delivered here, too!

Experts
Posted 21 hours ago | By Elly Both