With a new indoor play exhibition for kids ages 0-12 and an innovative children’s theatre festival launching in May, The Artground is sparking children’s curiosity in new and exciting ways

There is soooo much to love about The Artground, mamas! For one thing, it’s FREE! That immediately moved it right to the top of our list of the best indoor play spaces in Singapore, but what we love even more is its emphasis on creativity (through everything from gardening, to music, to making slime) and child-led play.

From 25 May to 3 June, The Artground will play host to 100 and 100 More, an arts festival for families and young children that will endeavour to reimagine what theatre for young audiences can be. With nearly 70 ticketed and non-ticketed programmes, drawing on works from Australia, Denmark, Scotland, Indonesia and Japan presented for the first time ever in Singapore, there will truly be something for everyone. The Festival’s name was inspired by the poem “The Hundred Languages of Children”, by Reggio-Emilia founder Loris Malaguzzi. The poem conveys the importance of imagination and discovery play in early childhood learning, celebrating a child’s natural curiosity. With its motto “A Curious Place to Be”, The Artground, too, strives to encourage curiosity, and the festival will aim to embody theatrical presentations that highlight the wonders of imagination and artistic expression.

In presenting these evolving and newly incubated works alongside award-winning productions from regional and international partners, The Artground looks to inspire local artists (including children!) with the creative spark to develop even more original content for young audiences.

The theatrical imagery in Hans Christian, You Must Be an Angel, promises to be a profoundly moving experience for kids 9+ and parents alike. Presented by Denmark’s professional theatre troupe Teatret Gruppe 38, which has toured globally, the interactive show invites the audience to inspect a long table filled with 21 different fairytales, in the process encouraging us all to see the magical little things around us while acknowledging that all human beings simply want to be seen, and loved.

A particular highlight will be the premiere of Into the Blue Forest, by local theatre practitioner Jeffrey Tan, who spent the past year gathering children’s input at The Artground as he developed the piece. An immersive, bilingual, intergenerational performance about friendship for children aged 4 to 8, Into the Blue Forest is highly interactive and presented in a 360-degree theatre space. Children provided input on everything from its dramatic elements (including puppetry, dance, music and storytelling) to its colourful costumes. Importantly, most of the festival’s productions use non-verbal narratives, which is particularly important when presenting works to young audiences whose language skills are still developing. Highlights for little ones will include the use of puppetry in both Puno (Letters to the Sky) from Indonesia, and the charmingly magical Songs from Above, from Denmark. Both works were chosen for their rich visual vocabulary, which “creates an unmediated creative response in young audiences that is beyond words”, according to Luanne Poh, Director and Chief Worm (!) at The Artground. Songs from Above is particularly toddler-friendly, presenting a series of “musical, image-rich stories about being little in a perfectly remarkable world.”

We spoke to Bodil of Teatret Gruppe 38, who shares the reasons behind their unique approach to theatre and what’s in store for kids and adults alike in Hans Christian, You Must Be an Angel.

What made you want to explore creating works for young audiences?
You see, I have been doing theater for children, young ones and adults for 36 years – and when I started way back, I had an idea that the stories I wanted to tell were mainly for children. It had to do with themes, form, and the idea of being very close to the audience giving the feeling of togetherness, in contrast to the more established theatre, where you sit far away from the stage just watching – not feeling being an important part of what is going on.

Later I realized that this was not just a good idea for children. So today, we don’t distinguish between children and adults when we create our performances. Our stories are so complex that there is plenty to deal with for children as well as adults. That is such a pleasure and challenge to me as well.

Have you made any changes to the show to appeal to each city you’re performing in?
We do make changes when we travel around in different countries – not in different cities. There might be some (unwritten) cultural and moral regards that make us change a bit.

What can kids expect from the show (and what will they take away from it)?
I am sure we will amuse and challenge a move children as well as adults with this show. I hope that the audience is a bit familiar with Hans Christian Andersen’s fairytales – but if they are not, I am sure they will go home and read afterwards, because it is some of the most beautiful tales you can imagine.

What other family-friendly shows are lined up for Teatret Gruppe 38?
All our performances are family-friendly. That is our watermark, or brand you might say. We are looking so much forward to meet the Singapore audience. It’s our first time ever. 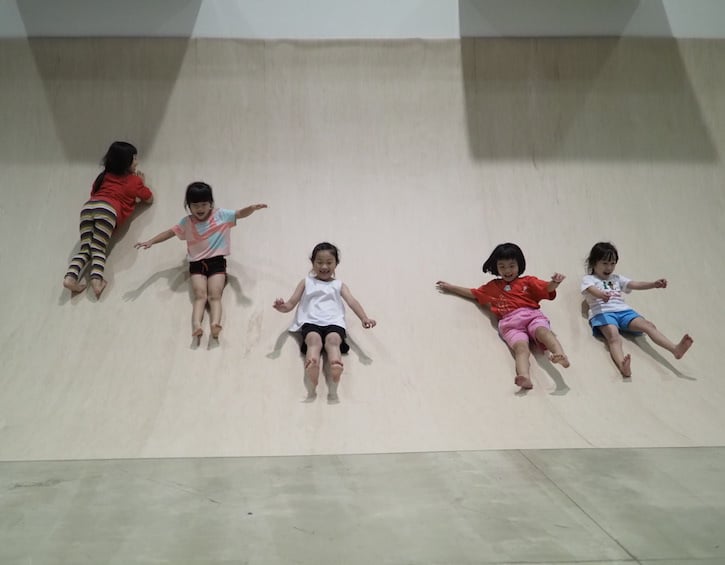 Tickets for the 100 and 100 More Festival have already gone on sale, mama, and are priced from $22 each (with earlybird and bundle discounts available!). Although the festival doesn’t start until 25 May, in the meantime you can catch The Artground’s newest exhibition, Rolling @ TAG, which just launched this April and presents a smart-interactive playspace where spontaneous and self-directed play are encouraged through exploration via simple electronics and technology. We’ve been by with our preschooler and baby and each found different ways to be delighted!

So if you’ve got curious kids, now you know where to take ‘em. We’ll see you at The Artground, mama!