Whether you’re a first time parent or are just new to Singapore, there’s a lot to know about car seats and car safety here, particularly since so many people ride in taxis. One of our mamas has done the research to spell out exactly what the laws are — and what equipment you need for your baby to be safe.

It is a far too common sight in Singapore: babies riding in arms rather than in car seats, young children unbuckled and moving freely about the back seat of the car, children seated in the front seat of the car. Parental magazines spend little time discussing car seat safety. However, car seat safety is an extremely important subject.

While Singapore has one of the lowest car crash fatality rates in the world at 6 per 100,000 people per year, we are not immune to tragedy. On September 22, 2014, Mr. Alfred Ng Hom Lum crashed into an SBS bus. His one-and-a-half-year-old daughter was sitting in the front seat in the lap of his pregnant wife. The little girl was taken to KK Hospital, where she died three days later due to injuries sustained in the accident. On June 3, 2015 he was found guilty of “inconsiderate driving”, for which he was fined 800 SGD and banned from driving for three months. 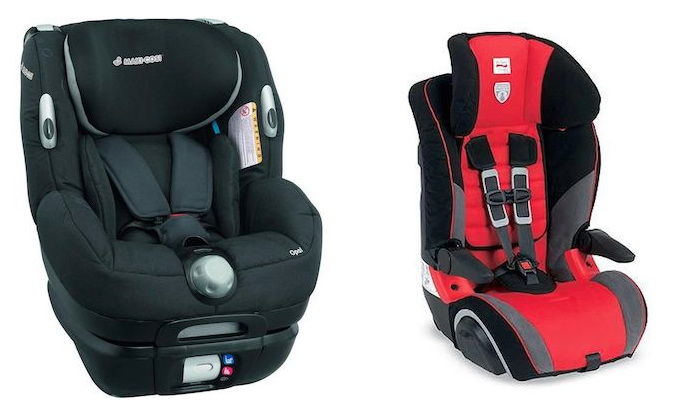 The most recent revision of Singapore’s car seat laws took effect on January 1, 2012. The law now says that: Alex K. shared with me about her experiences trying to get a clear answer about what constitutes a “government approved booster”. Person after person at the LTA passed the buck until she was speaking with the Traffic Police. “The best indication of a standard that I managed to eke out was ‘You better have a seat, ok? Got seat better than don’t have’ before I was asked to call up the LTA yet again as ‘LTA set the standard one, not us.’”

The majority of car seats sold in Singapore are 5-point harness car seats without a chest clip. A 3-point harness has two straps that come over a child’s shoulders and meet at the waist to join with a clip between their legs. A 5-point harness has straps that go from the shoulders down over the child’s hips that join with a clip between their thighs and may or may not have an additional clip at chest height. A chest clip makes the car seat harder to escape from and more protective in the event of a crash. However, after-market chest clips not installed by the manufacturer are not safety tested and are not advised. While 5-point harnesses are widely available in Singapore at a variety of price points, a 5-point harness with a chest clip typically costs in excess of 500 SGD and is only available at high-end stores.

I was told by my car dealer that many/most cars in Singapore do not have Isofix, although it is required by law in many countries. Singapore doesn’t require that cars have it, making it a luxury feature (taxis don’t have Isofix, for example). In Singapore car seats are mostly secured by seatbelts threaded through their backs, which is not as secure. Make sure to see your car seat instruction manual for the correct way to install a car seat when there is no Isofix system. A common topic of discussion on parenting forums is how to handle car safety if your family does not own a car, and only occasionally takes taxis. Legally, you are not required to use a child restraint system, but many parents would prefer to do so. The Orbit G3 stroller base can be conveniently combined with their car seats.

There is a stroller called Sit n Stroll, which has mixed reviews depending on the parent you ask; some love it, while other parents say that it is difficult to maneuver as a stroller and extremely heavy to install as a car seat. Singapore Mom Amelia recommends the safe traffic system, but they can be difficult to find at local parenting stores.

It’s also a common issue to have a taxi arrive at your condo with broken seatbelts/seatbelts that are too short to properly secure a car seat. Parents reported having to call four or five cabs before finding one that is compatible with their car seat. I have been yelled at by taxi uncles because it takes too long to fold a stroller, never mind trying to install a simple infant bucket seat, much less a toddler seat.

It is easy to shrug off finding the right car seat/child restraint system for your family as too much work. However, it’s worth the effort. Brandy M., 38, was in two car accidents in the space of 18 months. The first time, she was stopped at a red light when a car moving at roughly 30-40kph rear-ended the car behind her, setting off a chain reaction. Her three young children were in car seats, and she was wearing a seatbelt. The kids were fine, she needed to have several vertebrae in her neck fused. The second time she was driving down a street near her home when another driver fell asleep behind the wheel and hit her car while going less than 40 kph. Again, all three children were in car seats and she had a seat belt on. Her car was totaled, the children were fine, but unfortunately she is facing additional spinal surgeries.

When we asked Brandy what message she’d like us to leave you with, she simply responded “Car seats save lives.”

Things to Keep in Mind When Selecting a Car Seat